How to keep others safe while riding an e-scooter 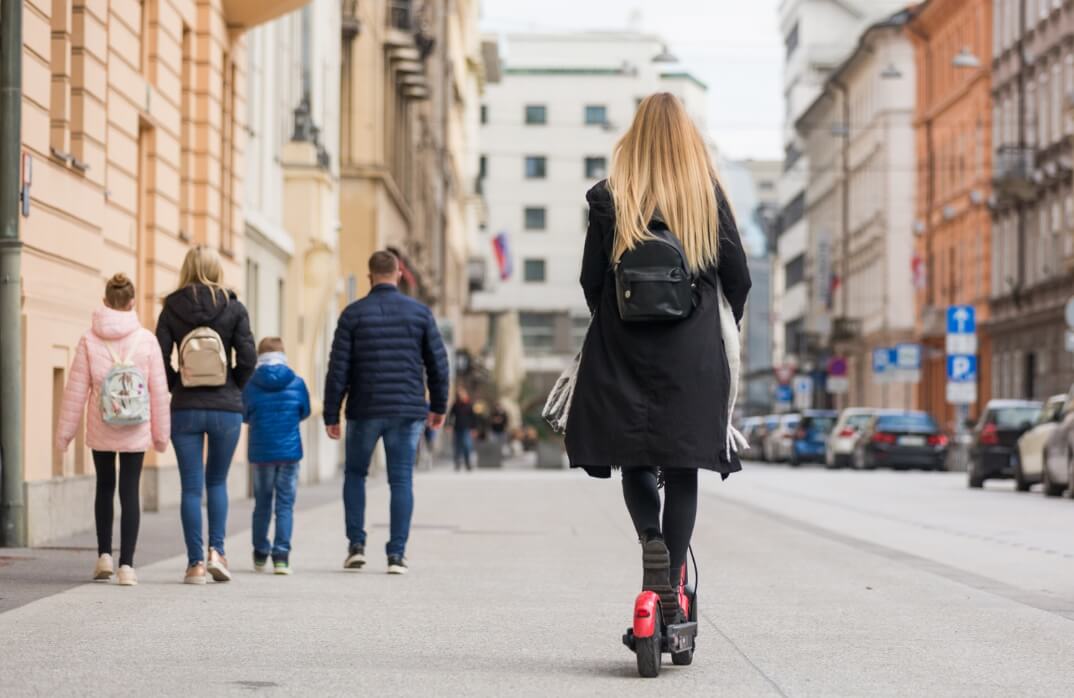 Riding an e-scooter can be challenging sometimes; it is very important to be cautious at all times and keep in mind the safety of others.

We have earlier talked about how to stay safe when riding an e-scooter. You can read all about those safety precautions in our previous blog article

While riding, there are many external factors to consider. It is not only the e-scooter rider's behavior that matters, but also that of the pedestrians, drivers, and other vehicle users. To keep everyone safe, it is beneficial to know the dangers others might cause or find themselves in as well as to be prepared for their unexpected behavior.

Pedestrians are the group that is at the highest risk in traffic in general. They are most vulnerable and often have a false sense of safety. For instance, data from Knowles et al. (2012) showed that in 48% of crashes, pedestrians “failed to look properly”.  That is why the e-scooter users need to be cautious and always ride in a way that considers any different kinds of behavior the pedestrian might show.

First of all, try to avoid pedestrian areas if you can. However, if you can’t, move slowly and anticipate. It is never a good idea to expect that hitting your brakes will stop you immediately. Most scooters have an Eco or Safe mode, limiting the speed to  8-10 km/hr, which can be useful on these roads.

Your braking system is well-developed, but not to that extent. In fact, stopping last second will only wear out your tire surface, which will lead to slippage over time. You can learn more about the brake system of e-scooters in our blog article about “what to look out for when buying an e-scooter”.  Maintain a safe braking distance!

Pay attention to the traffic rules. If you drive at a walking pace, you are allowed on sidewalks, however, it is still recommended to avoid sidewalks. Read up on the general traffic rules in Belgium. Keep in mind that there are local regulations, be sure to check the ones in your city. There are local regulations though, so you should also check those. For Brussels, they are basically the same as the general Belgian regulations.

Some behaviors of pedestrians to look at our for:

Pedestrians quite commonly behave abruptly, such as stepping aside suddenly, stopping, or crossing the sidewalk all of a sudden. In those cases, it's even more important to have full focus and to anticipate so that you do not react last minute. In these cases especially, taking it slow can give you extra time to react - every second counts!

If some pedestrian suddenly stops, don't try to drive around them, but brake as early as you can. There might be another person waiting just behind the one in front of you.

Another common problem with pedestrians? They might be distracted and not concentrate on what’s happening around them. . You should catch their attention by making yourself audible and visible. First, use your bell when a pedestrian is behaving dangerously (stopping abruptly, jumping to the side, etc.).

Secondly, during the night and evening hours, wear reflective accessories or clothing. According to a large-scale study by Lahrmann & Madsen (2016), the safety impact of a yellow bicycle jacket is immense! Lights are a step in the right direction, but are not so noticeable by day and barely distinguishable by urban background clutter at night. In fact, 6,800 bicyclists in that study reported that visibility clothing decreased bicyclist collision rates by more than 70 percent.

Another facet you can expect of some pedestrians is aggression. We’ve probably all had our share of verbal aggressions from pedestrians already. How should you react to them? Just don’t. If nobody was hurt and you did nothing wrong, it’s probably best to ignore them. Especially, don’t react back aggressively. Some people are just out for a fight or had a bad day - don’t take it personally! 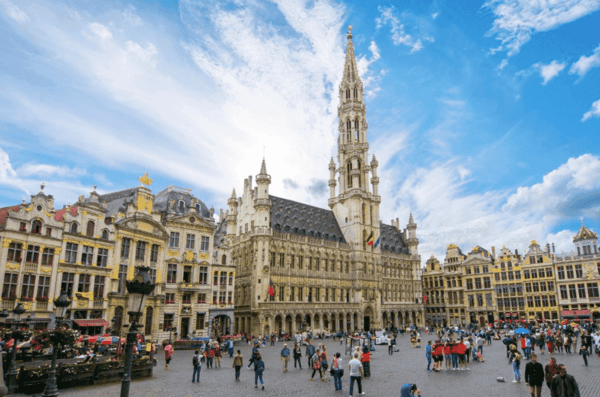 Car drivers are often still not used to seeing e-scooters on the road. They might often have tunnel vision and what’s more, they are in danger of the blind spot. Avoid finding yourself in the blind spots of cars, buses, and trucks. They will not be able to see you in those areas - be aware!

Another big safety precaution while riding an e-scooter is to signal your moves, so others can act accordingly and reduce the risk of accidents. If your scooter has a turn signal, it is strongly advised to use it, if not, an alternative option would be to signal your turn with your hands, only if you feel safe letting one hand go.

As explained on the website of the Bike Law the three essential hand signals are: 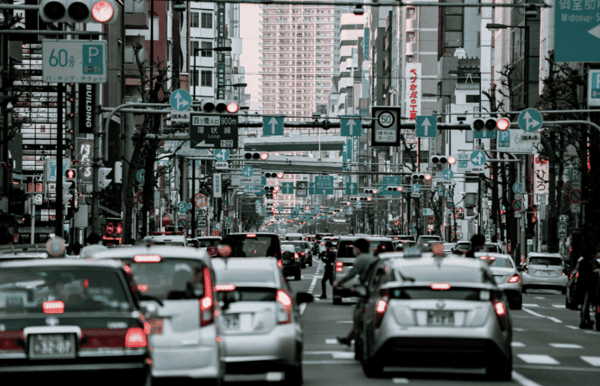 Cyclists frequently use the same lane as e-scooter riders. So, you will be up close to cyclists more often than any other type of participant in the traffic.

Cyclists may speed up, try to fit through narrow places, and might drive recklessly through the busy streets of the city. While doing so, they might unfortunately forget to be careful about the others on the road. This is why it is important for you to take caution when they don’t.

Regular precautions are advised. As an e-scooter rider, keep enough brake distance when riding alongside bicyclists.

As always signaling your turns is very important for everyone you are sharing the road with.

Since in general people are trying to reach their destination as fast as possible, bikers will catch up and try to pass you. In moments like this, keeping a distance is difficult and the unexpected appearance of others might surprise you. Try to give a minimum reaction and focus on your own ride. 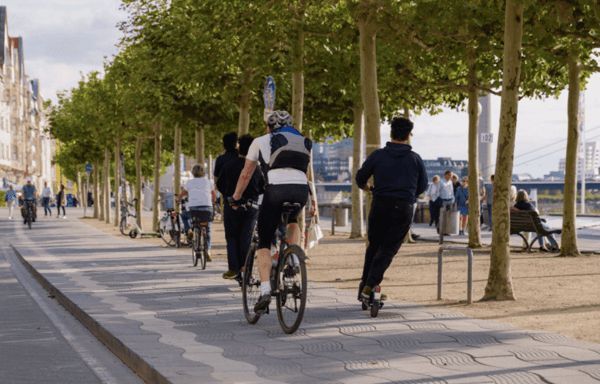 Motorcyclists also speed and try to fit narrow places, they are similar to cyclists in that sense. However, because of the bigger size and faster velocity of motorcycles, they cause more danger compared to bicycles.

Like drivers, motorcyclists are also still not used to having e-scooters on the road and so they might not always remember to act accordingly.

They also have difficulties that might cause accidents because of the vehicle they are using.

Motorcycles have longer braking distance. This is one of the biggest reasons for motorcycle accidents. Even if the driver breaks on time, it is seen that the motor itself can easily spin out of control.

In addition, motorcyclists also have less control over their steering capabilities. When the rider has an immediate shock and is caught out of hand, it is easy for the motorcyclist to steer off.

As an e-scooter rider, it is safer to not get too close to motorcyclists when sharing the road to avoid accidents and to keep both sides safe. 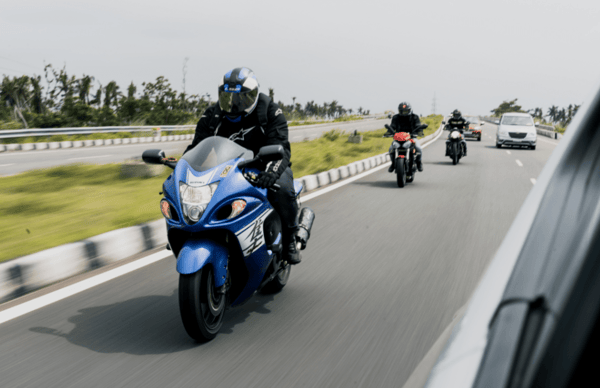 Tips while riding the e-scooter

Riding in the busy streets of the city can be tricky sometimes, you may not have the space to ride as freely as you wish. In these times, rather than trying to squeeze in narrow places, it is a safer option to step off the scooter and walk with it until a broader space comes, or at least go at a slower speed to not put anyone in danger of crashing.

To ride at a constant speed is important. If you suddenly stop, the chances of the riders behind you seeing you stopping is very unlikely and a crash might happen. The places to stop should be selected with caution.

When it becomes darker, it also becomes more dangerous to ride a scooter or a bike, be a pedestrian, or be a driver. Human eyes naturally see bright colors more easily. So wearing bright clothes or reflective vests would make you more visible in the dark and prevent accidents, even if you think you’ll look silly.

Keep in mind that other people might not be as careful or responsible as you. There will be times when you’ll have priority or ride in the correct lane, however, some people will not be respecting these. At these times, instead of trying to fight for justice and put yourself in a dangerous situation, you should just consider your safety, be the bigger person and take a step back.

While riding, complete focus should be given. Many people believe that listening to music via headphones would not be harmful, but it is a big distraction. The rider loses touch with its environment. Other activities such as eating, drinking, or using the phones should not be done at the same time. 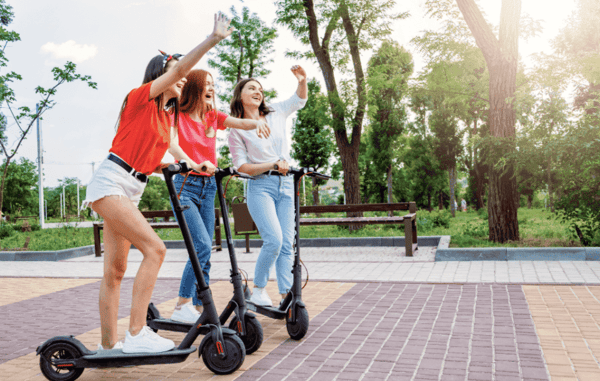 The safety of yourself and others should always be the priority no matter which transport method you are using. By following these precautions, you’ll surely reduce the number of potential accidents and fully enjoy the fun and benefits that e-scooters offer.

When was the last time you did a full check-up of your e-scooter?

Schedule a safety check-up at STEPfix

Topics: safety of your e-scooter